When I first met Bobby I was shocked. He was in horrible condition, his skin and eyes obviously infected. He was skinny and malnourished and one of the saddest looking dogs I had ever seen. But that night, while I was cleaning the shelter, I let him roam free with me. He was perfectly content to curl up in a pile of blankets next to me while I washed dishes. He seemed like he didn’t have a care in the world. He was just happy to be in off the streets and he knew that next bowl of food was on its way. Thankfully we were able to get him out of the shelter and into a foster home. Here Bobby’s foster details his condition and his journey to recovery this far.

Bobby came to us from Kentucky in a critical state of apparent neglect.  Upon arrival at the Last Hope shelter, he was barely able to stand and appeared to be blind.  Due to Bobby’s serious condition, multiple tests were run at his first vet visit, including one to rule out Lyme’s disease.  His coat was described by the vet as “moth eaten” and he stunk badly from a staph infection on his skin.  His eyes were also infected which had affected his vision.   X-Rays of Bobby’s stomach and GI tract revealed sharp edged objects which appeared to be rocks.  He was malnourished and 10 pounds underweight.  This, combined with the extreme wear on his teeth, led to the conclusion that Bobby was so hungry that he had been eating gravel. Compounding the tragedy, multiple tests revealed that Bobby was heart worm positive.
Bobby’s initial round of treatment included antibiotics and vet-prescribed Science Diet canned food formulated to restore the GI tract. After his neuter surgery, he recovered in his new foster home and happily joined 2 other beagles to form a “hound pack”.  Although Bobby is now enduring the painful, lengthy treatment for his heart worm disease, he is eating well and his vision has improved.  His skin is healing and his coat is returning to normal.  Bobby joyfully wags his tail when greeted with “play bow” by his pack mates even though it will be months yet before he is well enough to play dog games.  Bobby’s vet bills are currently at $700 with more vet visits needed after he completes the first phase of heart worm treatment in 2 months. But to see the transformation in him since he arrived at the rescue is priceless.  Due to the efforts of several Last Hope volunteers, Bobby now has HOPE and a future to look forward to in a forever family!

Bobby has a long way to go on the path to recovery. But here at Last Hope, we don’t give up on dogs. Bobby will have the support he needs every step of the way and one day he will get to run and play with his foster pack and soon enough, a pack of his own. Keep watching here to see more stories of the dogs we’ve helped this year and where they are today! And check out https://www.youcaring.com/retirethevetdebt to help us reach our goal and continue helping dogs like Bobby! 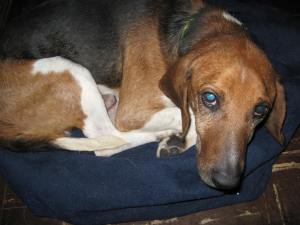 One thought on “Bobby”